Confidentiality is our priority, this is why you will find a selection of our operations.

At Night Over Hannover

Photo flight at night on behalf of a well-known Scandinavian utility organized the team from Foto-Film-Flug.de aerial photgraphs of the soccer stadium of Hannover 96. Because the client wanted pictures at night, our film flight experts used a 2-engined helicopter and caught up with all the necessary approvals. To ensure the most spectacular view, a separate permit to fall below the minimum ... [more] 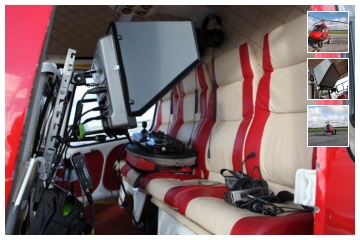 Cineflex use Gotland for the corporate video of an energy supplier in the past week, we coordinated with the Cineflex aerial camera system from Gotland(Sweden). The focus of the offshore film project was on the staging of a pipeline through lead. Even here in Sweden, aerial unparalleled quality and stability since the multi gyro-stabilzed Cineflex V14 system built by Sony even with ... [more]

Last weekend in the Harz mountains, aerial photographs were taken with only a one days notice. A Cineflex camera system and a helicopter was prepared in order to support the production of a new German series with adequate aerial photographs of Thüringen. The expert local pilots and the experienced operator reached, despite a very tight shooting schedule, produced the highest-quality images of ... [more]

Ready to put the movie experts from Foto-Film-Flug.de with Cineflex in a helicopter to shoot aerial photgraphs in Rheinland of all the famous cities. In addition to shooting in the daylight, a night flight was necessary to reach our team back on a 2-engined helicopter. The Eurocopter AS355 allowed us to take extraordinary night images of D&uuml;sseldorf. Even at this speed, Cineflex camera ... [more] 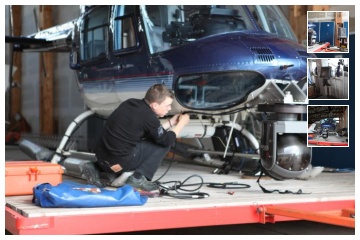 Last Monday, the events of Foto-Film-Flug.de, including an experienced operator in Warnemünde. The advertising clip of a foerign mobile phone provider made HD recordings of private yachts during a several hour off-shore flight. With the requirements of the customer, the aircraft experienced film pilot realized in cooperation with the perfect Cineflex operator made fast and low passes in order ... [more] 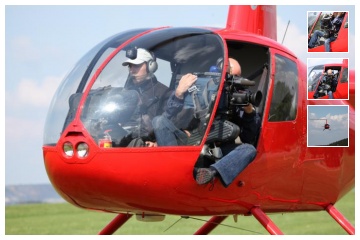 Winterberg with Tyler-Mini-Gyro, coordinated with the team from Foto-Film-Flug a film flight for WDR in Winterberg. For this documentary series, aerial photos were needed from a helicopter which were inexpensive but with high-quality. For this, our flight specialists used the Mini-Gyro manufacturer system known as, Tyler. This camera mount allows you to use your own camera trusted by the ... [more]

With Four Helicopters At The Nürburgring

After the Cineflex operations in Italy, France, and Croatia were held on the weekend, all participants met again at the N&uuml;rburgring. The team from Foto-Film-Flug.de organized the use of three helicopters and two Cineflex systems. One of them was, as usual, nose-mounted on a helicopter with the other attached to a special Englan rally car. In addition to coordinating the aerial photgraphs ... [more] 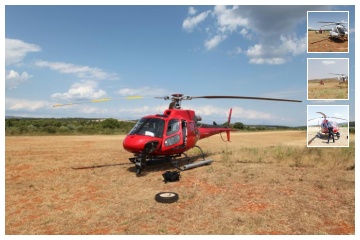 After filming in France, the customer immediately began a journey in Croatia with the Cineflex shooting in Croatia accompanied by Foto-Film-Flug. Helicopters, technology, and personnel flew from Germany to Croatia. The participants flew to Croatia with two helicopters to coordinate a complex project with multiple camera crews. A highlight of this shoot were the multple landings on the helipad ... [more] 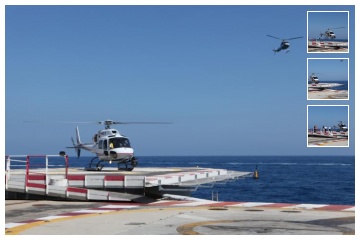 Cineflex shots in Monaco were oraganized by the team of Fot-Film-Flug for several days in France. St. Tropez and Monaco were filmed reaching an unparalleled quality from aerial photgraphs. Since the client in the Cote DÁzur did not want to forego the usual reliability of the system already in use. This camera system and staff were flown in from Germany. In addition to the variety of beautiful ... [more] 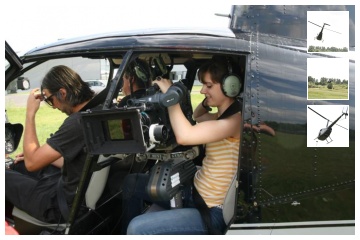 A famous German media agency filmed from a helicopter in Poland using a Tyler Mini-Gyro, a film project. Despite the very limited budget, the experts were from Foto-Film-Flug used the Tyler Mini-Gyro and a small helicopter which produced high-quality results. The easily-stabilized camera mount filtered out much of the vibration of the helicopter which portrayed peaceful images. Our client was ... [more]

The German series production team of Foto-Film-Flug filmed again over the NRW. To ensure the best possible quality of theserecordings, we used the multi-gyro-stabilized Cineflex system. The director flew with us to control the higly-specified desired shots. The experienced team and pilot put the wishes of the director in accordance with legal requirements, achieved th satisfaction of all ... [more]

Following the success of the aerial shots of Capri, our customer, himself, confirmed the outstanding performance of our entire team by booking our flight department for a European tour. In the upcoming weeks, we will fly with out customers in different countries with our know-how and will make unforgettable aerial photographs with the help of numerous Cineflex with helicopters. Since several ... [more]

Our film experts prepared a helicopter with Cineflex in D&uuml;sseldorf for ZDF(Second German Television). The experienced team of pilot, operator, and ground crew realized in just a few minutes the complexity of the shooting schedule at several well-known venues, as well as the pursuit of a car, through the Old Town of D&uuml;sseldorf. Cineflex showed their high flexibility and excellent ... [more]

Cineflex In Italy On Capri 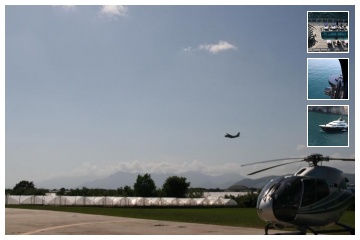 With just a one day in advance notice, aerial photographs with Cineflex and a helicopter provided pictures of Capri with the Foto-Film-Flug flight team. At the express request of the customer, the German Cineflex system was transported on the night by the employees of this house to Capri. As well, a helicopter from Germany preformed the aerial photographs. Despite a huge logistical effort ... [more]

Film and Photography In A Flight

Last weekend a photographer started with perfect weather, film flights combined with photos in the Hannover area. The team from Foto-Film-flug had a large helicopter so that the photographs and film footage was only a fraction of the normal costs. To ensure the best possible quality of recordings , the filming was done through the helicopters open-side-doors. The passengers were secured with ... [more] 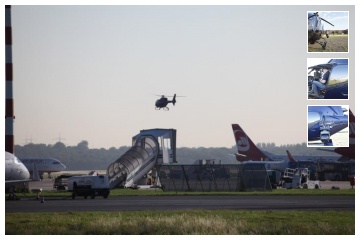 The use of Cineflex at Düsseldorf Airport last weekend from Foto-Film-Flug had a camera-ready helicopter ready. Cineflex filmed a well-known German airline take off and land and also the particular dynamics of the airport operation are also presented. The filming had been postponed due to bad weather but was resumed on a good weather day to shoot high-quality photographs which has been taken ... [more] 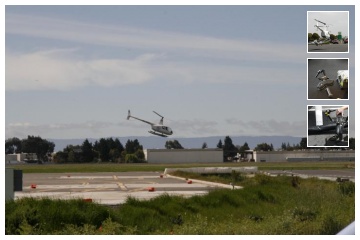 San Francisco flight movie- Tyler Mini Gyro was used for the opening of a new German series production. They made a variety of aerial photographs from a helicopter over San Francisco. On the shot list were several attractions such as Alcatraz Island, The Golden Gate Bridge, Pier 39, Fisherman´s Wharf, and the Six Sisters. To ensure the best possible results we intervened from the low-budget ... [more]

Cineflex At The Zugspitze

Cineflex helicopter at the Zugspitze this past weekend a German production company with the support of the Foto-Film-Flug.de flew directly to the zugspitze for this years Eurovision song contest in Düseeldorf. The landing of the helicopter on the zugspitze at 2,500 meters altitude ensured a quick and convenient recording from the director which was directly derived from the helicopter. Using ... [more]

The biggest shopping and leisure center in Europe, the CentrO in Oberhausen, surprises its guests every year by bringing in some kind of attraction. A steadily growing number of restaurants and leisure activities have drastically changed the environment around the CentrO over time. We were able to capture these new sights from a bird’s eye view last week. Despite not having much time to ... [more]

Taking pictures from the skies all over Europe is a daily task for Foto-film-flug.de. The city of Berlin seemed to have some minor hindrances, before we had the opportunity to hover the capital. Due to high levies, we had to gain permission from the proper authorities in Berlin. This is a procedure that is well-known, and is being done for years. After asking for permission, the pilot got ... [more]

Film and Photos over Leipzig

On a sunny day in autumn, one of our clients decided to create images of the well-known shopping center in Leipzig Paunsdorf. We expanded the helicopter by detaching the two side doors, so that two people could operate at the same time. We used a Robinson R44 helicopter type for this occasion, and it allowed for one person to film while the other is taking pictures, at the same time. By doing ... [more]

With Cineflex over Rügen

If recordings from the air are, suppose to be at high stakes, then one cannot go without the use of the Cineflex. For this exact reason, our client decided to use this technology to its full capabilities. Not only because of its panorama views, its zoom possibilities, but also due to its stability was the camera system wanted. In the early morning, our client entered the helicopter at the ... [more]

In spite of bad weather forecasts, our team struggled through the north coast of Denmark this past week to complete a film flight. After arriving although, the weather seemed surprisingly good, allowing recording to be made from ships on the harbor and lakes, which in the end provided some great moments on film. We used the most modern technology to record out of the helicopter. The Cineflex ... [more]

For the exhibit Ruhr 2010 this past Tuesday, Foto-film-flug.de captured images from the skies in Bochum, Duisburg, Dortmund, and Oberhausen. In spite of a minimal budget and therefore a small helicopter, the expert photographer still captured high quality 360&deg; scenic pictures. The pilot hovered a small radius of land, capturing the eye-catching places with never seen before images in ... [more]

This past weekend a well-known German production firm, with the support of the Foto-film-flug.de staff, filmed a sequence directly on a train-tip for this year's Eurovision Song Contest in Dusseldorf. The landing of the helicopter on the train-tip flat at 2500 meter high was a guaranteed for the director to get some good recordings. Through a stable Cineflex camera system, the shots turned ... [more]